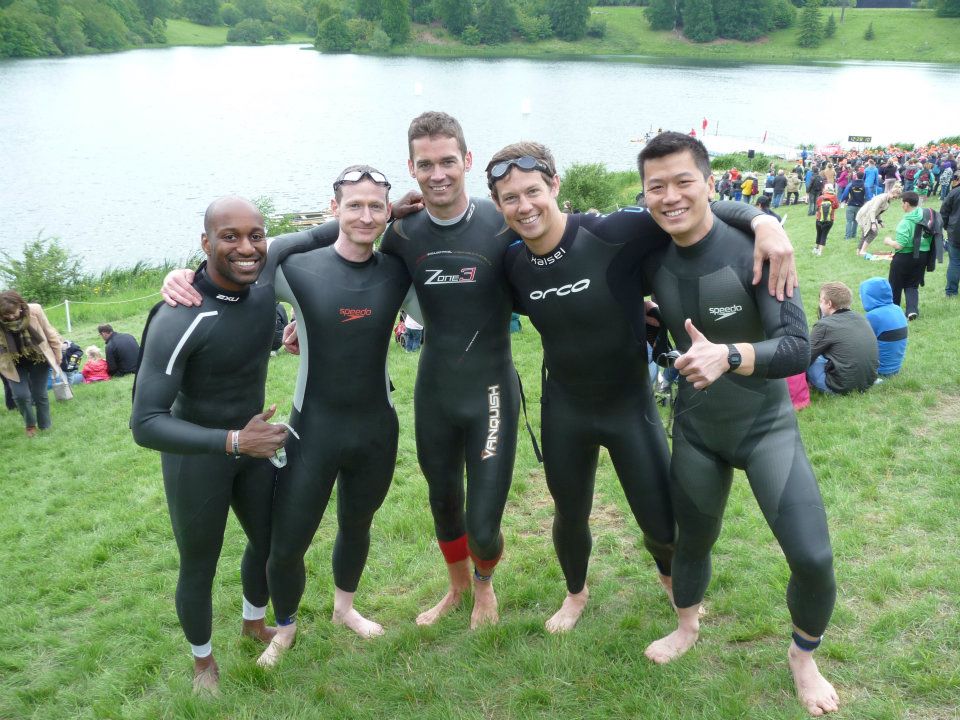 Holla! I don’t normally ask anything of all the lovely people that read the antics on Kobestarr.com. On this occasion I would like to say that my good friend Mo “Paulie Walnuts” Khurana (I don’t normally give peoples real names in posts but its important), who did the Blenheim Palace triathlon with me and will be doing the London Olympic is raising money for Cancer Research UK. Whether you know Mo or not but would like to sponsor him you can do so my going to his Just Giving Page . The action photos in this post are of him at Blenheim. Paulie on the Bike!

So it has been 6 weeks since the first Breaking 2:30 triathlon post.

In my last post, in which I set myself the ridiculous challenge of breaking 2hrs and 30mins for an olympic distance triathlon,  I said that i needed a time of 1hr and 20 for the Blenheim sprint to know that i was on the right training path. Did I beat that time? Er.. no.

Since then I have been licking my wounds and eating cake and thinking and about what went wrong on the day, formulating a game plan for the main event!

So what time did I get? We’ll get to that…here is the full match report.

I had a good nights kip close to the venue so felt really good in the morning. Red and I stayed in a B&B the morning before and so went down to quite early to enjoy the “&B” part of “B&B”. Thats “breakfast”, just in case you don’t know :).

I had the full works! I shouldn’t have! I know I shouldn’t have! I knew at the time as I was carving up the bacon and sausage, but I couldn’t help it. When you are in a B&B you have to enjoy the full extents of the “&B” part. Its the law! My defence behind it was that I had seen a similar attitude portrayed by a marathon runner on an episode of “Top Gear” (the one where a Jeremy Clarkson races a marathon runner along the marathon route). Surprisingly I felt fine afterwards.

We arrived at Blenheim in what should have been good time, and I enjoyed a good bit of faffing about time, and suddenly found myself short of time before having to get into the water. This is in part due to the fact that Blenheim Palace is HUGE and the layout is “user unfriendly”.

It’s also partly my fault. I got to the transition area with 20 mins to go realising that I didn’t have a race belt, I had lost my timing chip strap, I didn’t have a drinks bottle and I still needed to change into my tri-suit and put my wetsuit on. I don’t know how but I made it to the swim start with moments to spare with a newley purchased race belt and new water bottle in my bike cage. My timing chip was secured to my ankle by means of a zip-tie and I had a big bag of “Jelly Babies”…true story. I met Big Rich and a few of the other guys just as we were about to jump into the pre race briefing and jumped into the water. Damn – it was cold! As soon as I put my face in the water my body reacted by putting the back of my neck into spasm, jerking my head out of the water. I could see that breathing could be a problem!

In spite of the horrors of my last open water swim I decided to get to the front  but this time not follow the race line close to the bouys hoping that this would give me a clear run.

“At the sound of the klaxon, unleash hell”, I thought the course marshals were saying to each other, hoping for scenes similar to the start of the Russell Crowe film “Gladiator”. And then the klaxon went, and hell was unleashed, except, wait! It was all going rather well! It was all going “swimmingly” (ahem- sorry). There was a little scuffle at the start but I relaxed into a semi coherent freestyle stroke! I say “semi coherent” as the water was so cold my face still violently objected to being forced into it. Otherwise it was fairly enjoyable! There was however the slight discomfort from the mornings sausage, egg and bacon repeating on me. Note to future self – don’t EVER eat such a ridiculous breakfast before a race. EVER!!

I landed on the pontoon surprisingly at the same time as Big Rich and looked down at my watch. 13mins?!?! How on earth? I was elated! And then tried to stand up. I must have looked like a beached jellyfish trying to stand on its tentacles my legs were that wobbly! meanwhile Rich lept off, with all the gay abandon of a gazelle, into the distance. I would not see him again until the end of the race.

I haven’t done many triathlons, but the Killermanjiro-esque [sic] ascent to the transition has to be one of the worst! Plus I was still elated at my swim time and took the extra time to do the maths. I was two minutes ahead of schedule after the swim, surely i could break 1hr20?

The run to the transition, straight jacketed by the wetsuit continued for an eternity. I finally got there and found my friends bike, ok so where is my bike? Has someone stolen it? Ok, maybe that wasn’t his bike? It wasn’t. Where the hell is my bike? Someone has stolen it! I can’t believe someone has stolen my bike!

They didn’t. I had merely forgotten where it left it…idiot! So i find my bike, strip out from the wetsuit and for some reason take the extra time and care to put socks on. Why? Why, why why?

This all contributed to the worlds longest T1 time. I had already eroded the time made by the great swim!

Three laps. Three hard laps. Three hard, undulating, narrow and at some points downright scary laps. I hadn’t ridden this bike since the last triathlon and I chose the worst time to re-acclimatise and do simple things, like test the brakes. They worked, thankfully! Paulie coming out of T1

The surprise best leg of my London triathlon would prove to be weakest leg of this triathlon and I knew it at the time, constantly glancing at the clock as I watched the target time slip away with each pedal stroke.

Lots of things to work on here for the Olympic if i want to recreate the time that I got last year on that leg!

T2 was fine as I arrived at my set up, cooly removing the helmet and cycling cleats for the trainers. There was a slim to none chance that I could beat the 1hrs20 mark at this point but sod it, lets go for glory!

The running leg was 2 laps and 5.5km, not the standard 5km combined with Blenheims energy sapping hills. I still managed to give a good account of myself with no-one overtaking me whilst I continually targeted the next runner, catching up to them and using them as a spring board to the next guy.

Until, I caught up to Chris BC, one of Big Rich’s crew that I met just over an hour ago for the first time clad head to toe in foam rubber.

Instead of “sling-shotting” from him we engaged in a lengthy conversation.

“Ahhh I overtook you on the bike” he said. Many people did, I thought to myself. “Oh right… how you feeling now?,” I replied. “Not bad, slowing down a little,” he said. “Ok”, I said thoughtfully, “what we’re going to do now is push on through. We he have just over a lap to go. Stick with me if you can”

I have no idea why but I continued the inquisition, “how was the bike leg?”, “will you do another triathlon?”, “have you seen Big Rich?”, “do you come here often?”, “do you want a drink?”. Ok, so I don’t think I asked the last two questions but I soon realised that he was now lagging behind me. Had I badgered him into slowing down? Quite possibly! Another note to future self, lets not engage in random banter on the triathlon course eh? Just get on with it!

As I glanced round one of the last hairpin bends before the final ascent to the finish line I could see he was a good 100m behind. By now it was over 1hr 20mins, gutted, but lets push on through to the end.

I now had the finishing line within sight and even though I could have had a final sprint I decided against it as I am sure this is how I have injured myself in the past. I could see Big Rich and Scouse at the finishing line. Damn. I looked back to see Chris sprinting with gusto close behind me. How?!? This kicked me in to a sprint finish to ensure he didn’t pip me at the finish, ensuring my position in the table.

So after thinking about that race I have come to this list of things that I need to rectify or do better before the London Triathlon.

Ok so what were the results of the race? At the finish line