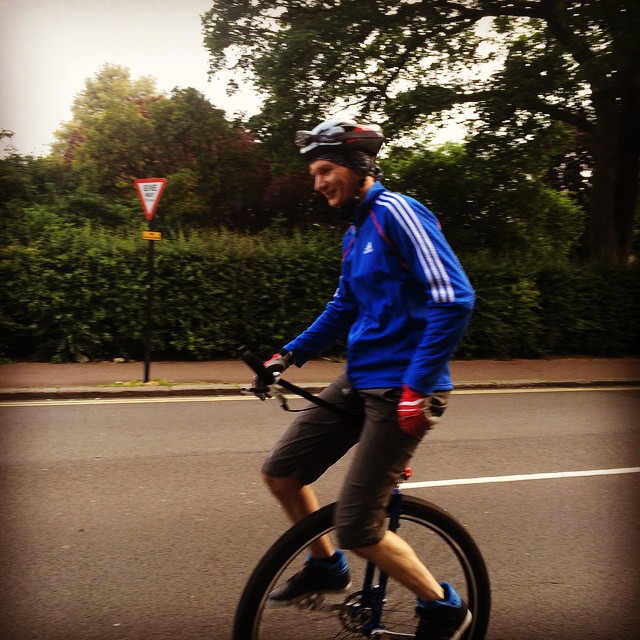 As I get closer and closer to Ironman Staffordshire 70.3 i’m getting more and more nervous. Im glad that this year I have addressed my largest area of triathlon weakness. My cycling.
I have always cycled. I learnt to ride a bike by myself initially on stabilisers and then taking one stabiliser off and finding the balance that way. One of my earliest memories is going round a corner of a footpath whilst on my bike and leaning too far into the side where that stabiliser previously resided. I ended up in a rosebush with a thorn in my knee!
As an older kid of 9 years old-ish, me and the guys used to tear around the neighbourhood on our bikes going to the park, the pond to collect tadpoles, any one of our friends houses or simply “cruising” around. As I got older and into my teens my main form of transport was my bike, to school, to the pub and to my friends houses. This same pattern was true at university. How would This bike do in a triathlon?

I was reluctant to try triathlons initially as I always had BMX bikes or “sturdy” mid-range mountain bikes and was well aware of being destroyed in the bike leg by everyone who had the “skinny wheels”. My friend, Tim, spotted an “off road” Sprint triathlon where road bikes were not allowed. This seemed like a great opportunity so Tim and I, along with a couple of others joined in the fun.
It was a great day and I had a blast! I finished in the top third of the table despite battling with a bad right hamstring, which took me apart during the run.
This left me wanting to try more triathlons, but the problem was still the same. Off road triathlons were few and far between so i’d have to man up and get a road bike or suffer on mountain bike with the chunky wheels. I was lucky in that the guy that I did the first race with was selling his current road bike and opted to I took it off his hands for a fair price.

Riding a road bike for the first time felt unstable and limiting. I’d always been used to the fat tyres and upright position of mountain bikes. Suddenly my back would hurt after every ride and it was difficult to bunny hop and wheelie and I was consistently aware of glass shards in the road and the chance of punctures.
I got to know this first bike “Petra” very well. At the start of my 30’s I moved to Norway with her and this is where I fell in love with riding on the roads. The freedom that the road bike give me reminded me of summers as a kid and was clearly something that I’d missed. Whilst in Norway I met a few of the local viking cyclists who took me on my first 100k ride – the first time i’d ever ridden for more than 1.5 hrs in a go, and the first time i’d ever bonked.
I then decided to take part in the annual Bergen-Voss cycle sportive, 160km across some of the some of the most beautiful landscape that Norway had to serve up. That was the second time i’d ever bonked. It was also the first time i’d come of a bike not being able to walk properly!
When it came to triathlons – i’d come out of the swim a bit knackered and it would take me a while to to gather my breath and my thoughts and settle into the bike leg. I would go past most people on the bike but there was always a percentage that would go past me and a fair few more that I would simply not be able to catch up! I didn’t know how they were doing that..
I had always used my general fitness to get me through the bike leg, thinking that the odd bit of cycling to hither and dither would be all that I needed. This was clearly wrong. I had swim specific sessions and I had run specific sessions, why should’t I have bike specific sessions?

In September 2014 I started to cycle with a bunch of guys who quickly taught me that I had a huge amount to learn when it comes to cycling. We’d meet in the mornings at Regents Park in London, have a warm up lap and then get into the session. My sessions would tend to be very short as I’d get “shelled” early on and i’d skulk off licking my wounds and come back fighting the next day.
Critically for me, these were my first structured bike sessions, and as I came back fighting each time I was getting stronger and stronger. This became most apparent when I would cycle back with the triathlon club and I would be shelling people.

The morning sessions came and came and came again. Suddenly it was winter and dark and raining and cold and we would still be out in the mornings riding. This was the first time I had actually trained through the winter! Normally I would hibernate until the blossom appeared and then wait a couple of weeks more before I considered thinking about going out on my bike.

Steady and consistent training was paying dividends and once I had figured out that I needed to eat more food on long rides 100k+ rides would be a fun session to look forward to and not something to dread!
This has all paid off greatly as most evident on my last triathlon at Hyde Park in June 2015 where only one person overtook me on the bike. I reeled him back in on the run.
Im looking forward to the bike leg at Ironman Staffordshire 70.3. I will be taking my new TT bike Cecilia out for a spin on that day and look forward to eating up the 50+ miles on her. Cycling has gone from being my weakest of the three disciplines to my strongest and I can’t wait to see how I do in the race but also to see where I am in a years time!
K*