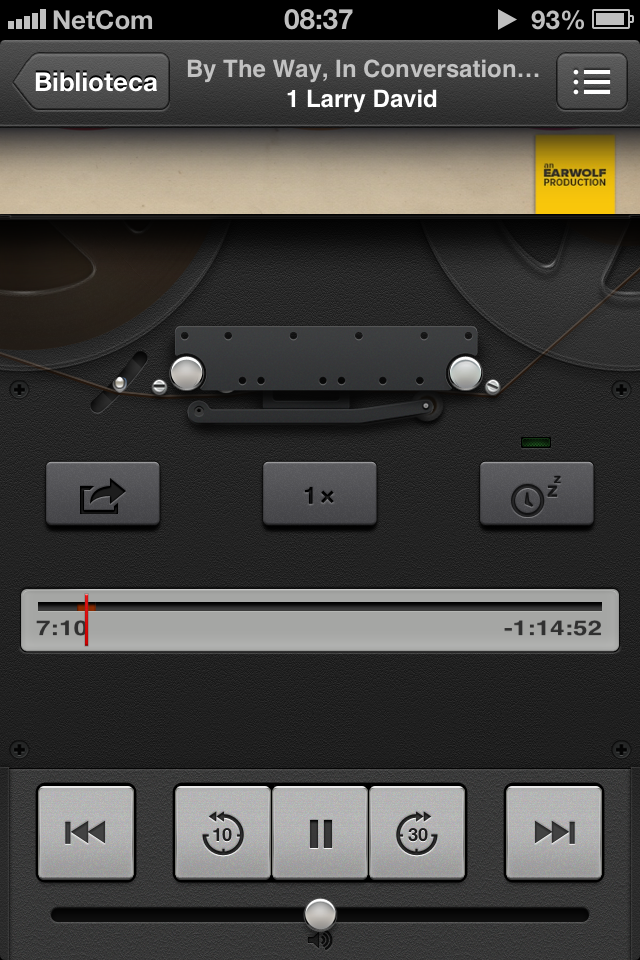 My last post here was about the CrApple Maps App that they forced everyone to use until Google saw fit to take pity on us and let us have their full featured app. I was never that bothered about the Maps app. OK things looked a bit hilarious time to time, but it still got you there. Mainly. Unless you randomly end up in the desert in Australia, which did actually happen a few times. The problem is, that you must be stupid if you end up in a desert instead of 29 Acacia Rd (Bananaman’s address). The three main giveaways would be:
a) Lack of houses
b) Lots of sand
c) No Bananaman
Despite it’s obvious flaws it really wasn’t the worst app that Apple had made. That honour belongs to the “Podcasts” app. What follows will be a personal tirade based on the fact that this is the app I use the most. Every day for at least an hour. I love listening to podcasts so much so that I’m starting to realise my obsession is a little weird. Listening to a podcast has been by main reason for going for long runs or bike rides. I wake up on Saturday mornings thinking “Goodie – I can listen to The Kermode and Mayo and Empire Podcasts, I should cycle up a mountain”.
I should preface the onslaught be saying that am an Apple convert. I used to be anti Apple but now I am pro-Apple. Apart from this app, which is THE WORST APP EVER MADE!! It currently languishes with only 1.5 stars in the App Store, but it should be lower. The following quote is typical of many customer review comments for the App on iTunes.

would give 0 stars if possibly. horrible in every way. oh, and this app cost me $40 in overage uses on my data plan. auto download decided it would be fun to download 1,000 old podcasts of each subscription i had. thanks for destroying my data plan with podcasts from 2010.”

Thanks “bigballer12321” – ( I really hope that it is an NBA star like Michael Jordan) for your unkind words! In fact one of my favourite things to do when i’m bored is to scroll through all of the recent comments about the app on iTunes. I is a great way to get over the post lunch lull. Here’s another!

I heard bossy man was firing people over the maps debacle…if so, what’s gonna happen to the podcasts mgmt team? Lava? Tornadoes? XP?”

Succinct and threatening in an “Old Testament” kinda way!

OK – but what is actually wrong with the Podcasts App? Well this is where I get a bit “listy”! (based on latest version 1.1.2 – with bug fixes…)

4) It is mind numbingly slow. Which, when coupled with point 3, is irritating beyond belief. You never know if it’s freezing up or just being slow at that instance. You think it has frozen so you press to leave the app and just as you hit the home button it comes to life, “surprise!”, it says very, very camply. Too late – you have left the app. Now the game cycle begins again.

5) Quite often, when you ask it to download a specific podcast it visibly thinks about it for a while before sputtering to a stop. Like an 80’s Ford Escort in winter.

6) What if I want to scrub forwards or backwards? Well if you look at the image above on the lovely Reel to Reel tape player (actually – it’s not lovely, it makes no fucking sense mp3’s helped to kill tape!!) view that comes up when a podcast is playing. You see that thin red strip? No? Have another look…you got it? Yeah THAT is what you are supposed to use to scroll back and forth. Can someone please tell crApple developers that the “The Thin Red Line” is a Terence Malick film about World War II, not a convenient way to navigate audio in a small screen. It’s easy to see how they got confused!

7) It kinda looks pretty but the user interface on all pages is a complete nightmare. This used to be Apple’s strong point but it seems to have been devised to follow the thought patterns of lobotomised earthworms

8) I’m trying right now to get it to find a podcast that I know is there as I want to listen to again. It won’t let me. CrApple says no…

9) Why isnt there a settings button?

10) Couldn’t there be three lines of descriptive text for each podcast. Or at least do a slow scroll? I am fed up with seeing these kind of lines when trying to determine whether I have already listened to it or not

A review of the big what? A REVIEW OF THE BIG WHAT?!?!?!?
11) To go to your downloaded podcasts you have to go to “library” but you have to go to “catalog” which is confusing. Like “Saruman” and “Sauron”.
12) Incompatible with external controls such as your car or docking station
13) The player likes to forget where it was when I left it.
14) Why if I want to skip through an episode do i get the option to skip back 10 seconds and forward 30  seconds (see first picture) from within the app but 15 seconds back and 15 seconds from the home screen (see second picture)?!? Firstly this is stupidly inconsistent and secondly 10  or 15 seconds is a measly amount of skipping time
15) And finally, but I must admit this is not my gripe as I don’t make playlists, but there is no ability to make playlists. The loss of this feature seems to annoy a lot of people!
As an Apple Born Again fanboy I see it from both sides. I used to think that Apple Stuff was all “Style over substance”. Once I went Apple I quickly realised that it did have substance to back up the style. This is until this the “Podcasts “app, where there is no style or no substance!
I am waiting and hoping that the next update will be a game changer, otherwise i’ll declare myself out! I’ll leave it to R.o.b.7.7.9.5 to close out…

Horrible, unorganized, slow. Used to use podcast everyday but this new app is so unorganized have to search to download new podcasts you already have. No quick find like the old one. From a company with such high standards this is garbage.”