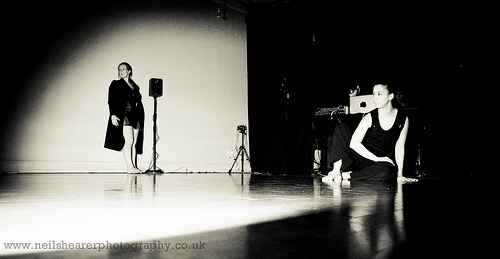 March 2010 saw the second year of the Turn dance platform and in doing so brought together 20 of the Northwest’s finest dancers, choreographers and installations filling every available space within Greenroom. One of the 20 artists will be chosen for the Turn Prize and the opportunity to expand and show a full piece as part of Greenroom’s next season.

Tonight is White Flag, made up of dancers and choreographers Mancunian Jane McLean, Portuguese Vanessa Abreu and composer Sam Salem from Derby. They have been working together for just over 18 months and performed their debut work ‘Disregarding Gaze’ on the opening night of this year’s Turn event.

The dance piece is entirely engaging from start to finish. The performance takes place in a room little smaller than a squash court. Spectators are invited in whilst Jane dances in silence by herself in the dark, the only light coming from a laptop which shines on Sam’s face and the open door as the audience enter and settle jostling for a viewing point from the sides of the room. Once that door is closed the music begins and Sam starts ‘diffusing’, a process where the sounds and tones are pushed around the room though any combination of eight speakers strategically located in the extremities of the performance space.

A small 40w light illuminates Jane and her movements for the first time, but little else. As the music continues, floor lights turn on in time with the music, Jane stops and you can see Vanessa fully as she dances by herself. As the contemporary piece proceeds, both Vanessa and Jane display a huge variety of skills, at times balletic and on occasion acrobatic. They interact with each other both as discrete bodies but now and again in contact with jumps, catches and strikes in the air, on their feet and on the floor, arranged in time with the music and lighting changes. ‘Disregarding Gaze’ finishes with both dancers together on the floor; the room falls silent and is plunged into darkness, waiting for the audience to vacate.

The concept for ‘Disregarding Gaze’ was developed from Sam’s idea about modern day society and the perverse relationship we have with being watched. “We all crave privacy but at the same time are exhibitionists” says Sam. “I was thinking about how it’s beautiful in a way that big cities may have thousands of CCTV cameras linking to rooms full of screens but there’s probably just some guy sitting there reading a newspaper”.

The idea of “watching but not seeing” became the foundation for the whole dance collaboration. Composer Sam, who is coming to the end of his PhD in Musical Composition, works by going out and recording the sounds of the city and making pieces from it. The music and the melodies for ‘Disregarding Gaze’ come from voices and buskers and sounds captured on the streets.

Sam and Jane started White Flag over a year and a half ago with Vanessa joining them after a year. Wanting to achieve a true collaboration between and the music and movement Sam and Jane u

sed to meet in Manchester, which was difficult because at the time Jane had been working in and studying at Laban Dance Centre for contemporary dance in London. Traditionally either the composition or the choreography in a dance piece takes precedence. “In the early stages, retrospectively we were actually learning what the other part does,” says Sam “we were developing the vocabulary for the piece together.”

The music was finished a few months prior to the completion of the choreography but essentially isn’t complete until the performance on the night as Sam diffuses the sounds around the room in real time. “When Sam finished and I started I did get caught up in dancing to the music” explains Jane “but realised that it’s not about that so went back to the original concept of ‘Disregarding Gaze’ and we came up with something else before coming back to the music.”

Vanessa, who has been studying dance for 13 years, including 6 years at Laban where her and Jane met, proved to be a good influence on the piece and its concept in particular. “My choreographic process is such that the movement is the last thing that I think of. I have an idea about the atmosphere that I want to create so I think about all of the sounds, textures and energy that need to exist in order to create it.”

Jane talked about how they tied it all together at the end. “When we got Sam’s music it was quite difficult as it’s very cinematic, if you close your eyes you can see it, it’s amazing! We were concerned about how we were going to fit with it and the resulting piece being too much. We found a way to work with it. Hopefully it works; hopefully we’re not too much!”

Words by kobestarr originally published by Now Then Manchester