Letter to Kermode and Mayo #2: “This Means War” wasn’t that Bad…was it? 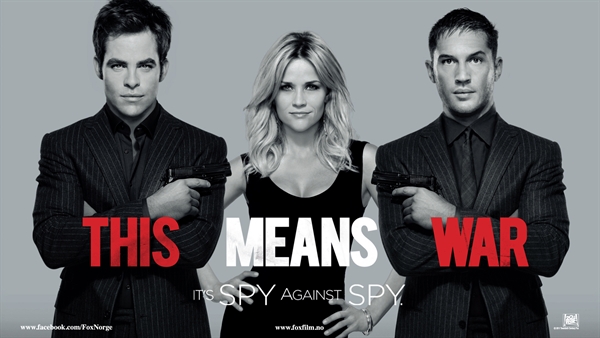 For the uninitiated peoples in the world, one of the main draws of the Kermode and Mayo Film review show is when Mark Kermode comes across a film that is both bad and insulting to humankind. When he watches such a film explosive energy is harvested and stored deep into the roots of his 50’s quiff and left there to fester, coagulate and ferment.

This explosive type of energy is saved until the next time that Mark is in the BBC Radio 2 studio, sitting opposite Simon Mayo and Simon utters the trigger phrase “So now its time to talk about film xyz” or “so what do you think of film abc” and then KABLOOM!!! a full Kermodian Rant ensues.

Top 10.com even lists the top best rants over the past 10 years of the show with the top 5 being…

5. A Nightmare on Elm Street

2. Pirates of the Caribbean 3: At the Worlds End

1. Transformers 2: Revenge of the Fallen.

Of the rants that I actually have heard my personal favourite is the “Sex and the City 2 Rant” mainly because from the outset he says. You “aren’t going to get a rant” – before exploding into a rant. As you can see in the YouTube clip below:

A good rant does brighten up my week, adding a spring to my step and making me feel happy that i’m not one of the poor people that sat through a film that he has just lacerated! Poor helpless souls I titter mockingly to myself! Last week I went to see a film “This Means War” in Norwayville with friends from work. I knew what i was getting into, I had seen the trailers and I was prepared for it to be rubbish. It was but it was fine…you know…like a McDonalds. Even worse, a McDonalds from a drive thru, because you can’t even arsed enough to park up and get your sorry ass out of the car, so you deal with the ordering through a voice changer set to “indecipherable” driving 3metres to window where you throw change at the McEmployee and ask for more napkins straws and ketchup. You then crawl another 3 meters to be told that because you asked for no pickles that you have to wait in the “losers” parking zone until another McPloyee lurches over and gives you your “food”. You eat it in the car. Fuck it. And for some reason it tastes goooood… i’m never “lovin’ it” but it tastes good. Then you feel sick and your car smells of manky “chips”.

The point is you know what you are getting into and that makes it all ok. Like “This Means War” I had seen the trailer, at first  I was disappointed in Tom Hardy, he’s gonna fight Batman in the next er… Batman film for crying out loud!! I was then disappointed in the fact the Gremlinesque (I think its the pointy chin..) Reese “Weatherspoons” is the object of attraction for two best mates.  Really?? Is she the best you can do? But I knew it was gonna be rubbish and silly and fine and have some rubbish bits and some funny bits. This is exactly what I got.

I was really surprised to hear in the Kermode and Mayo Podcast from the 2nd of March that Mark Ranted about it. So much so that I decided to write in about it…

My name is Kobestarr i’m from Manchester but for the past year and a half I have been working in Bergen on the west coast of Norway. I have been listening to the show for the past 8 months or so and this is the second time I have written in. I am a big fan of the show, the podcast and the Wittertainment in general.

Being based in Norway even though we are less than two hours away by plane we have to suffer with the sporadic release of films her. For example the excellent “Chronicle” was out in the same week as it was in the UK but “Inbetweeners the Movie” is only just being advertised. I have been informed that “The Muppets” may never get here – but I dont believe that nasty rumour!

Due to the sporadic release pattern I have been surprised to see films like “This is War” cropping up in the same week as the UK. I went to watch it with a couple of friends from work here based solely on the trailer and knew what we were letting ourselves in for and we weren’t wrong.

I was disappointed to see Tom Hardy in it but it carried along at a good pace, the two friends had some implausible fight scenes before engaging in low brow banter before fawning over a girl who is not really worth the bother. The film and the dual fawning continues, a  “who will land the girl” competition develops leading to some run of the mill laughs. It continues to potter along with the level of spying silliness increasing whilst the laughs stay the same. A bit of tinkering and tankering and kissing and explosions and then the film is done!

I listened to the podcast after seeing the film and whilst I can’t deny that the film wasn’t good by any stretch of the imagination I was massively surprised to hear a mini Kermodian rant on the matter. Surely it just wasn’t worth the energy. “This Means War” is lacklustre, souless and uninspired but  adjectives of “Nasty” “Walking Corpse”, “Cynical”, “Crass” were all a wholly undeserved. The people that step into the cinema know what the deal is. This is where Mark can refer to the law of diminished expectations and I am aware that this applies in this case. We see the trailer, we know what we are letting ourselves in for when we buy the tickets, we enjoy the bad film because we knew it was going to be bad and then we leave.

I don’t know what and why a “McG” exists  – and I agree that Tom Hardy looked weak in this film but nasty it is not. The strongest adjective applicable in the case should simply be “Silly”.

Loving your work guys what happened to the Podcast Extra Word for Twitter!

Kobestarr from Manchester via Bergen